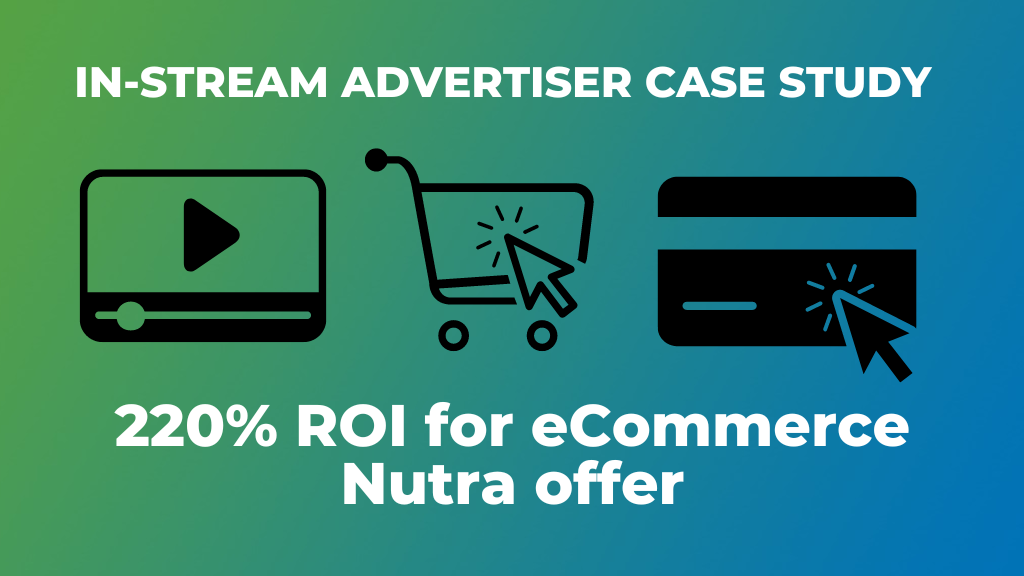 In this In-stream video advertiser case study, an ExoClick advertiser wanted to convert a Nutra offer to the Indian market via his eCommerce website, Nutra is a very popular vertical with consumers in India. The advertiser had never tried video advertising before and was advised by his account manager that In-stream video could convert well for his product as it has a high CTR. The problem was that the advertiser did not have the creative resources to create video ads. His account manager recommended that he use ExoClick’s Video Ad Making Service, where ExoClick creates free video ads to use on ExoClick’s network. 7 different video ads were created for the advertisers to enable rotation of the different creatives. The advertiser very kindly shared how his campaigns were set up, his strategies and the results.

For our In-stream video advertiser case study, we interviewed the advertiser to find out how he created such a successful campaign.

Q: How long did you run your test campaign for?

A: My account manager stressed that it is very important to run test campaigns first so I could generate enough data to optimize the full campaigns and create ad zone white lists to target. I was advised to run the test for at least 7 days including a weekend and I have to agree because you can’t get a successful campaign overnight. I actually ran it for 10 days from 8-18 April which covered 2 weekends. Even though I could have tested Outstream and Slider video, I decided to concentrate on In-stream because the CTRs are much higher, also I was new to video advertising, so this helped me focus on one video format.

Q: How many landing pages did you create and what content did you include?

A: Initially I created a total of 10 landing pages. From experience I know that it is always good to start with as many landing pages as you can, because as an advertiser you never know what will appeal most to the target customer.

For the content there are some key messages you need to communicate, especially for Nutra products, so the landing pages had different combinations of:

During the test campaign I tested the 10 landing pages using ExoClick’s automatic optimisation landing page algorithm, I chose the Even distribution option which spread the traffic out evenly between my 10 different landing pages. By the end of the testing period I was able to choose the top 4 landing pages which I then used for my full campaigns. I also put the 4 video ad creatives on rotation, to keep consumers interested with fresh content.

Q: What was your targeting strategy?

A: First of all I always look for categories, so I first scale my campaign by seeing which categories perform the best. Then I use regional targeting, this is especially important in India because there are many local languages and you must take care to target the right region with the right local language on your Landing Page. I also targeted Mobile on Android & iOS because the majority of Indian consumers connect to the internet via mobile devices.

Q: What was your bidding strategy?

A: For other formats I tried with ExoClick, I always used Smart CPM, so I did the same with the video campaigns because it’s a nice feature and you can get a good idea about which zones at which bids are performing well. Then later l made separate campaigns for those specific high performing ad zones. For those campaigns I still used Smart CPM but set the bid a little higher to win those zones. If I found some zone was performing really well reaching my desired CPA of $6, then I asked my account manager to arrange a traffic deal for those zones.

Q: How did you optimize your campaigns?

A: I always start by looking at ad zones. I block expensive CPA ad zones such as $8 to $10 that also have a low CTR. I always keep a fixed CPA amount for my offer, if some ad zones cause me to spend above my set CPA then I will block that zone also.

Q: What were the final results of the campaign

Here you can see the daily evolution of Costs versus eCPA, based on my goal of order confirmation. The graph shows: the money spent daily on the campaign (blue) and the cost of acquisition for each one of those confirmations (black).

Q: Do you have any advice for other advertisers wanting to try video ads?

One important piece of advice is always to make your video creative with a real human voice over in the correct language and explain all the great benefits about the product, luckily ExoClick provides voice overs in several languages with our free Video Making service for advertisers. This way you connect with your target consumer. I recommend that the video also features a product image, that way the end user knows what they are getting. Finally include pricing and discount pricing so they know what they can pay and finally a CTA button to provoke a click.

I would also suggest that you must create a minimum of 3 different video ads, the more the better, for my campaign I had a total of 7 different videos. If you have problems in creating videos, the ExoClick team can help you create them, just talk to your account manager.

One other thing is that I have never seen such a high CTR for this offer with other ad formats so in the end video ads are a great option for any nutra offer.

We hope you found this In-stream video advertiser case study useful for your own video ad campaigns. To find out more about ExoClick’s Video ad making service for eCommerce here.