Home » О нас » Блог » Why you should be targeting China, US & India with online Games offers for Mobile

Why you should be targeting China, US & India with online Games offers for Mobile 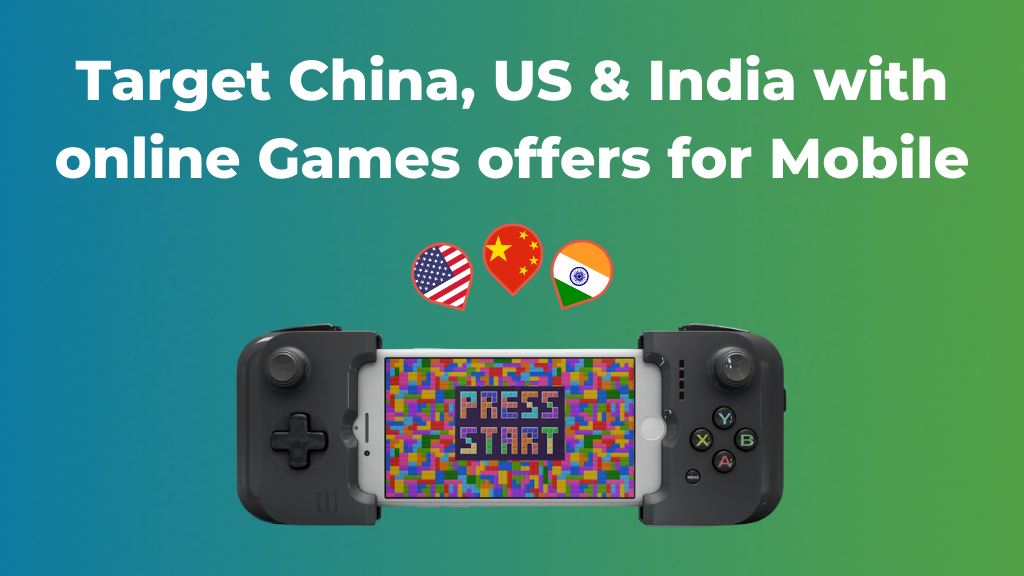 The online games segment generated approximately 21.1 billion U.S. dollars in revenues, being a huge segment of the overall Video Gaming industry. In this blog post we will give you some insights into the US, Chinese and India markets to help you maximize the performance of your offers using ExoClick’s traffic sources. Whether you are promoting online games or mobile gaming apps, our aim is to inform you about each country’s markets for Games.

So, what does the Online Games Industry look like in China, US and India?

Here’s why you should be targeting these 3 countries for your online games offers:

US: The United States, generating an approximate 5 billion U.S. dollars in annual revenues and the market has 175 million gamers, that’s around $28.57 per user.

India: India has a highly promising gaming market because of its impressive growth: 2020 to 2021, its online gaming revenue experienced 28% growth, from 79 billion rupees to 101 billion rupees (1bn to 1.3 billion US dollars). This trend started in 2019-2020 with a 22% increase, and it is expected to continue growing.

China, India and the US are between the top 16 countries to spend the most time on their phones. According to App Annie Intelligence, People in India, China and the US spend an average of 3 hours on the phone. From these 3 hours, nearly 1 (a 33%) is spent playing online games ( India, 42’, China, 60’ and the US, 52’).

Phone games have become popular because portable devices are increasingly more affordable across the world. So is internet connectivity, which means that users don’t need to invest in expensive consoles, and can access the internet more easily. Also, mobile games are portable and can be played while commuting, killing time when out of the house.

It all points towards mobile games! While desktop is still popular in China for Games offers impressions, it is mobile that is leading the way in the US, India, and showing growth in China too. 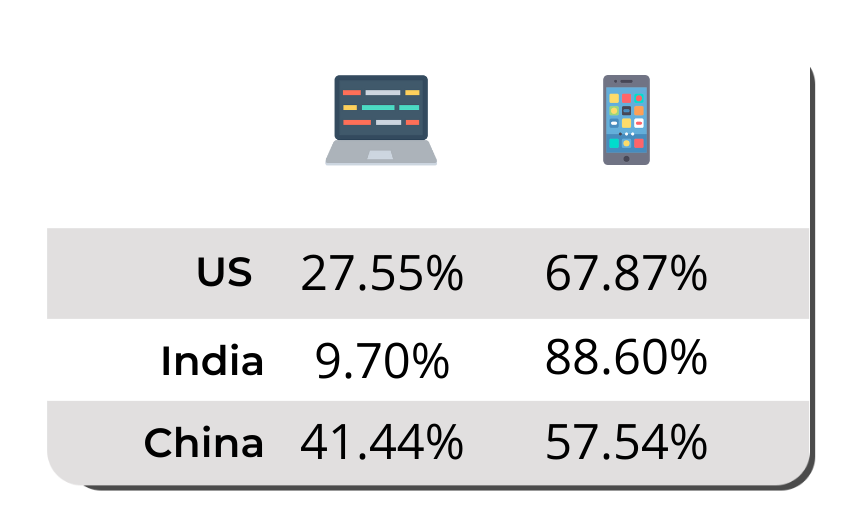 Best Ad formats for mobile games in China, US & India

Here’s the breakdown of average CTRs on ExoClick’s network for mobile games offers in the US, China and India: 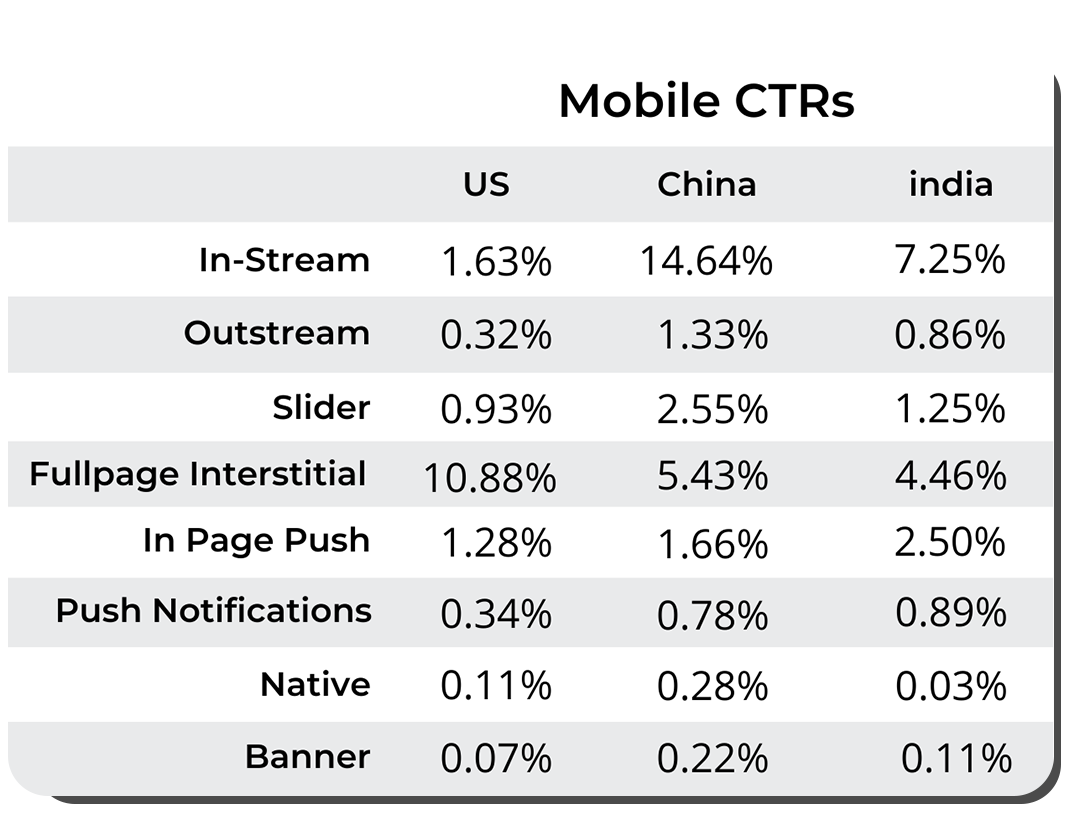 So it seems that in the US, the best 3 ad formats per country are: 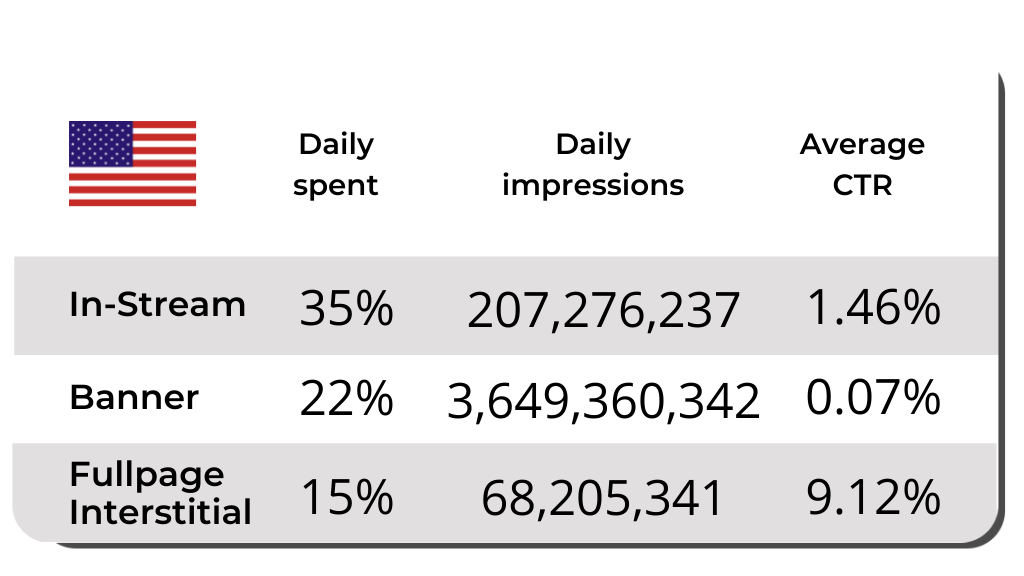 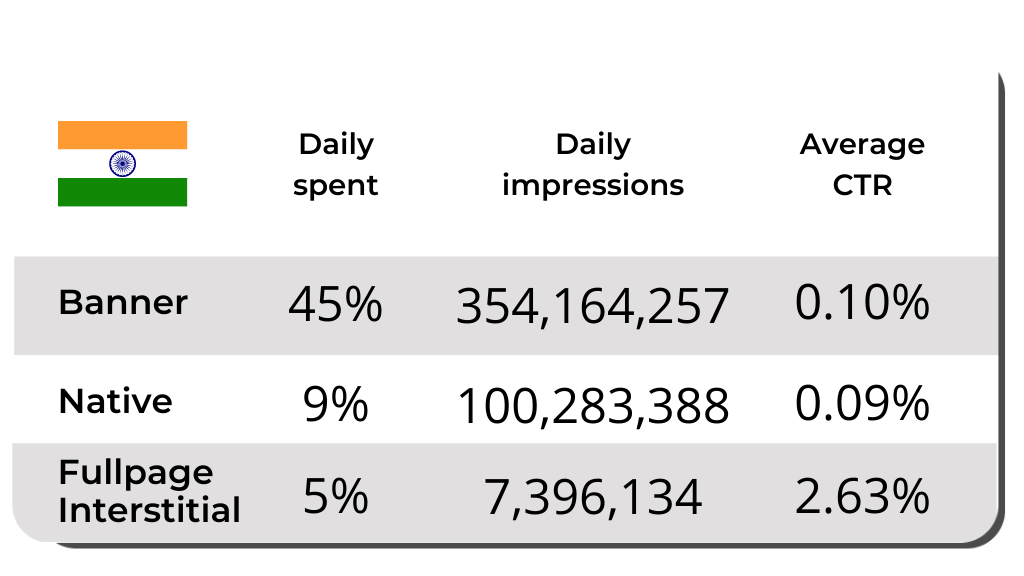 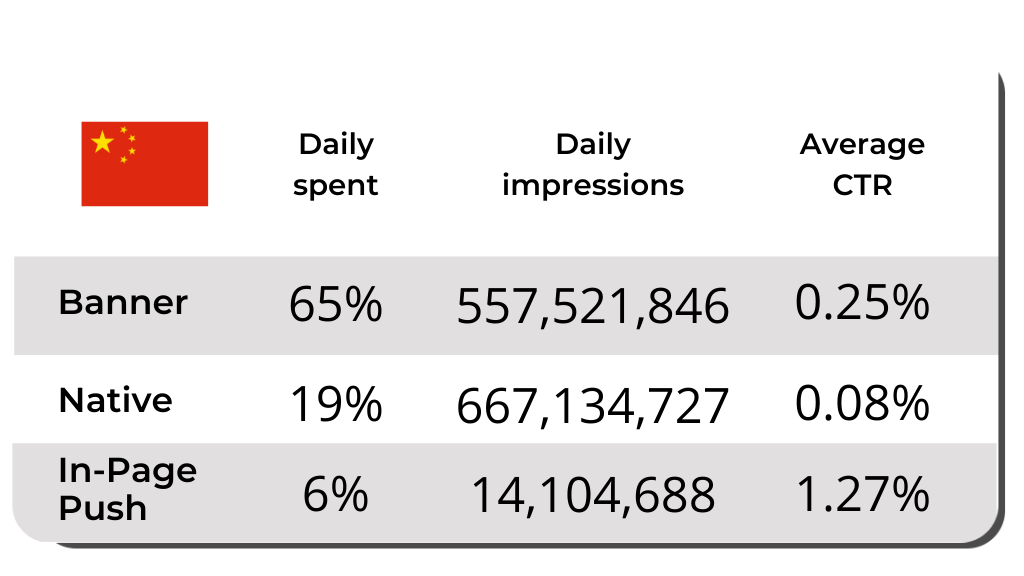 As we can see, video and rich media formats are key in order to promote video games:

Here are some tips to help you target each of these 3 GEOs with your Games offers:

Tips to promote mobile and online games in India

According to Statista, about 47% of India’s mobile gaming population is constituted by men aged between 25 and 44. Indian gamers especially enjoy Callbreak Multiplayer, Coin Master and 8 Ball Pool, which are gambling and puzzle games.

Tip! Tap into Bollywood: Bollywood films are incredibly popular in India and worldwide, being watched by 3 billion people yearly – second to Hollywood films, being the most prolific film industry in terms of viewers. They tend to be action packed films with spectacular choreos and colorful outfits that offer a very compelling visual element. Actors and actresses of the genre are idolized and loved by the audiences, so if your game has any Bollywood elements to it, make sure to reference in some ways the actors and actresses, the colors, and its musical aspects.

Tip! Speak the right language: While India has 22 separate official languages, it is home to a total of 121 languages and 270 mother tongues. The most spoken 5 are Hindi, Bengali, Marathi,

Telugu and Tamil. When targeting your ad, use the regional language with texts in your video ads to attract your audience, ALWAYS translated by a native speaker.

Tip! Use Video formats: Video ads have the highest CTRs because they give you the chance to show your game in its whole splendor, in a very entertaining way. Show bits of Gameplay, or create TikTok style videos introducing and interviewing the characters.

Tip! Target Dating Site users: There are around 31 million Indian users on dating apps, which makes India the second-largest market for dating apps. ExoClick’s Members Area Dating traffic is a high quality traffic source, since it exclusively targets active users that have gone through a signup process. If your Games offer is based around a  dating simulator, try targeting this traffic using direct link ad zones through Menu Tabs for Games.

Tips to promote online and mobile games in the US

57.7% of American mobile gamers are men, 42.3% are women, 32.7% of them aged 25 to 34 years old. Some favorite games are Apex Legends Mobile, Subway Surfers and Figurine Art, which are mainly action, arcade and casual games.

Tip! Culture: American culture praises very highly academic, professional and economic success. So if your game is a very competitive one, let them know what prizes they can get in your ads.

Tip! Make it social and varied: If your game offer lets gamers play with others and have in-game chat features, let them know in your ads. Also, remember to refresh your content! Gamers are exposed to several stimulating realities at a time, and can get bored quickly if your ads are repetitive.

Tip! Language: There are between 350 and 430 languages spoken in the United States of America. The top ones are:

Tip! Use location dynamic tokens: If you are using Push Notification ads, or Native you can use dynamic tokens to target the specific city or region where the users are. For instance, you could use the token {city}. If the targeted city is Chicago, the ad could read ‘ Play the most popular game in Chicago!’.

Tips to promote mobile and online games in China

45.6 percent of Chinese mobile gamers are female. As some studies have revealed, they are more likely to make in-app purchases, which is the reason why mobile games target female players. The 3 most played are Honor of Kings, Anipop and Peacekeeper Elite, which are multiplayer battle games, puzzle and PUBG style.

Tip! Culture: The standards of “dignity” or “prestige” are deeply ingrained in Chinese culture. So if your game is about well-known Chinese heroes and ancient kings, pop stars or people climbing the social ladder, remember to translate the values of ‘gaining face’(achieving status) in your ads.

Tip! The most watched TV show genre in China are soap operas, such as Ode to Joy and My Sunshine. If your game is a dating simulator and has some skins and clothing items in the style of these shows, let the audience know in the ads.