ExoClick’s Guide to The Bidder 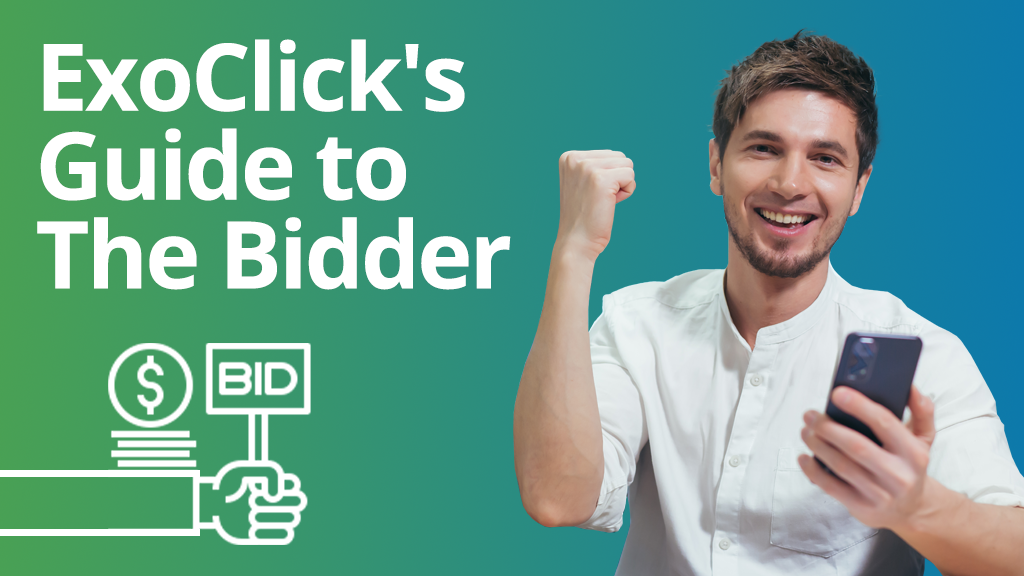 Setting up your bidding for a test or full campaign is one of the most important steps of your campaign. Getting the right bid price has the following advantages:

Wouldn’t it be great if you could automate the entire bidding process to ensure you get the best ROI for the lowest bidding price? And on top of that, automatically block ad zones that don’t convert for you, so you don’t waste money bidding on ad zones that haven’t worked for your campaign. That’s where ExoClick’s Bidder comes in! It works just like a smart assistant automating your bidding process by specific rules you set, getting you the best price for each bid, blocking non-converting ad zones and building up a white list of high converting ad zones. Freeing up your valuable time to spend on business development instead of spending time manually optimizing your bidding. ExoClick’s Bidder is a powerful tool for your campaign optimization,

You can use the Bidder to do two things:

To use the Bidder, you need to set up at least 1 Bidder Algorithm. The steps to do this are: Campaigns > Bidder > New Bidding Algorithm.

To use Automatic Bidding Optimization, a campaign must have at least one conversion goal set up. However, you do not need to set up conversion goals to use the Blocking Rules. This tool works for both pixel and S2S tracking.

Automatic Bidding Optimization: Select a conversion goal from the Conversion Tracking drop-down. Based on the conversion goal’s conversion value, you can choose between the following two methods:

Once the Automatic Bidding Optimization is running, it will adjust the bids up or down, to keep them under the conversion value for the selected conversion goal.

Here is an example of an aggressive bidding strategy Bidder set up: 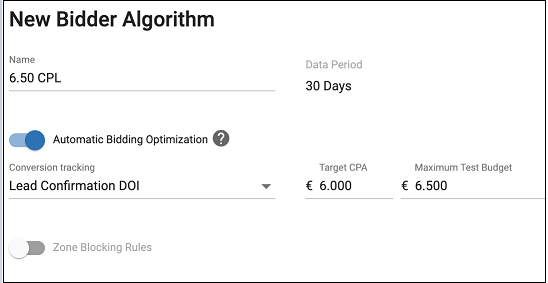 The payout for this Double Opt In offer is €6.50, so the Bidder is set with the Target CPA at €6, 0.50 cents below the “real” CPA target and maximum test budget aligned with the real CPA target. This strategy is aggressive, but it will help to minimize any loss.

For a less aggressive approach, try a basic setup that still ensures your campaign is profitable. Set a target CPA slightly lower than the actual CPA, for example if the CPA is 2, set your target CPA at say 1.9. Then set your Maximum Test Budget at twice the CPA and don’t use any zone blocking rules. This is a very basic algorithm, but still ensures that the campaign will be profitable.

Zone Blocking Rules: By turning on the Blocking Rules option, you can create additional optimization rules that determine what gets blocked automatically based on the rules set. On the left the Rules can be set based on Impressions, Clicks, Spending, CTR, Conversions, eCPA, or ROI. These elements can be combined to define which dimensions get blocked.

This is very beneficial and is a great way to automatically optimize your campaign targeting set up based on your Target CPA and Maximum Budget settings. So for example, you could find that targeting Chrome is more expensive than Safari, therefore if the campaign is underperforming on Chrome, that will be blocked so you are not bidding too high for low quality traffic on Chrome.

The number of extra rules you create is unlimited, so you can keep adding more rules to the algorithm to further fine-tune the automation, by clicking the Add button.

Please note: Each rule will be applied on an OR basis and not an AND basis, which means that each rule is applied individually. Whichever of the set rules fulfills the condition first will be triggered and will block the ad zone.

Once all your desired rules are added, click Update and new Blocking Rule(s) will start optimizing.

All three of these examples display a variety of rules, but all of the examples follow these guidelines:

Campaign objective: To optimize campaign bids by SOI and to block all ad zones that are not generating SOI and sales to lower the risk of generating sales with a low ROI.

Rules: The first rule blocks all zones after 10,000 impressions that don’t get sufficient clicks. We are optimizing the bids by SOI, but blocking zones that have a low CTR, and the 2nd and 3rd blocking rules are focused on securing profit and ROI based on SOIs.

What ad formats will this work for? All formats except Popunders, because Popunders don’t register clicks.

What type of traffic is being targeted? All traffic categories

What will be the effect on campaign bidding? The Automatic Bidding Optimization looks to find the best SOI performing zones, and the Rules block ad zones that deliver bad quality SOIs (without sales).

Note: On the third rule, having an ROI of 100% would represent that the revenue generated by the zone is equal to the investment, so as a general rule of thumb it is recommended that after a significant amount of spending, ROI should be a minimum of 80% of this 100%. From this point exceeding 100% (and being profitable), should be achievable through campaign optimization.

Campaign objective: To try to get maximum profit by optimizing bids by SOI, but with the possibility for a much more profitable payout with DOI and also test specific GEOs while keeping all costs per conversion controlled.

Automatic Bidding Optimization: Again the payout is $2 for SOI and $8 for DOI, here we are optimizing bids by SOI, so we set the Target Conversion Value at $1.8, 11% below the payout for SOI.

Rules: We are blocking ad zones that don’t have a good eCPA for SOI and DOI and we are adding an extra rule that will block countries that are not delivering sales after $65 of spending. The third rule of this bidder algorithm is especially designed for strategies/campaigns that target multiple countries, such as English-speaking countries, Tier 1 countries, etc.

What ad formats will this work for? All ad formats.

What type of traffic is being targeted? All categories

What will be the effect on campaign bidding? To ensure profitability and if DOIs are achieved the profit margin will be very positive as our bid price is based on SOI. It will also block every GEO if no sales are generated after spending $65. This is a good way to test the performance of the offer in each GEO. Each rule represents a different event in the sales funnel, the idea is to keep all of them under a controlled cost.

Campaign objective: To get the maximum amount of SOIs but blocking ad zones that don’t deliver sales.

Automatic Bidding Optimization: The payout is $2, so we set the Target Conversion Value at $1.8, 11% below the payout. As you may have noticed we chose 11% for all these examples, but there is no set %, just between 10%-20% is a good guide for a sweet spot. You should experiment to see which works best for you. Obviously the higher the bid the more traffic you can win.

Rules: In this super simple example we are optimizing the bids based on a SOI, but we are blocking the zones that are not delivering Sales. This is the most versatile Bidder set up because it can fit into almost any campaign as long as you are tracking at least two events across the sales funnel.

What ad formats will this work for? It can be used in any format.

What type of traffic is being targeted? For this offer Native traffic from all categories

What will be the effect on campaign bidding? As stated in the objective, to bid for ad zones that deliver good SOIs for a lower eCPA than $1.8, but cut the zones that are not delivering sales. Because SOIs are the first part of the sales funnel, and ultimately sales are the most important KPI as this is the key to being profitable.