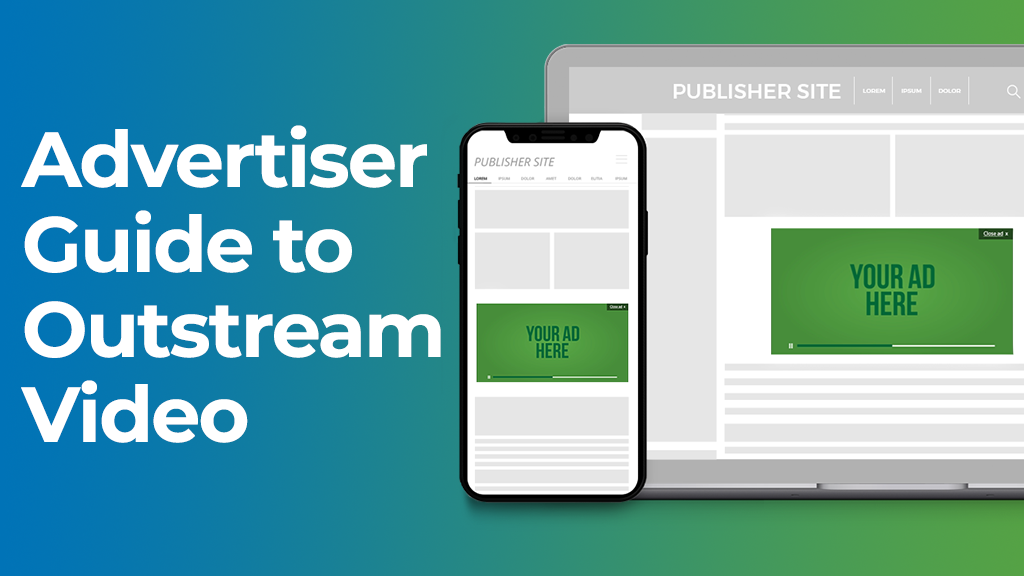 According to HubSpot, 52% of marketers say video is the type of content with the best ROI. A Singlegrain report noted that 93% of marketers use video. This is because viewers claim they retain 95% of a message when obtained via video (Social Media Week) and Wyzolw states 84% of people say that they’ve been convinced to buy a product or service by watching a brand’s video.

With the explosion of TikTok, Reels and the dominance of video traffic online the whole world is embracing video. Video ads have a much higher CTR bringing big potential for sales. Welcome our new video format Outstream!

This guide will explain:

How is Outstream displayed?

The Outstream Video ad is shown to the end user during their user journey and is fully responsive, playing on desktop, tablet and mobile.

Publishers set the positioning on their website for when the video ad will trigger. As the user scrolls down the page the ad zone pushes the website’s content down and the Outstream ad starts being visible to the user. This is really eye catching to the end user.

Once 50% of the Outstream ad zone is viewable on screen, the video ad automatically plays on mute, the end user can unmute the video ad. Clicking or tapping the video ad opens your offer’s landing page in a new tab.

As the end user scrolls further down the webpage the video ad will pause, waiting to resume playing when the end user comes back to the content where the Outstream ad is located.

Create Outstream specific campaigns: In your admin panel don’t target In-stream and Slider with the tab All. Select only Outstream and create separate video campaigns with each format, because key metrics and performance between the three video ad placements are completely different.

Video creative: We recommend that your video ads are of a decent quality, shooting using a mobile phone for live footage is perfectly acceptable these days, and can help your offer appeal to a younger TikTok audience.

On Mute: Remember that Oustream video always plays on mute until the viewer clicks to un mute it, so ensure that you always include subtitles in the language that you are targeting. In fact you could get away with having no voiceover at all on the video ad, it could just be music if the user unmutes, but you are still telling the user about your offer using texts.

Unmute: If you want to include a voiceover in your Outstream video ad, you could use texts in the video ad to prompt the user to unmute the video, tell them they are missing out on something important so they should unmute for more details.

Beat the scroller: To stop the end user scrolling away from your Outstream video ad use a completing text or graphics that spark their interest as soon as the video has reached a 50% viewability.

Getting clicks/a higher viewability: Because of it’s placement your Outstream Video ad becomes part of the user journey, so that the user pauses, rather than continuing scrolling. Because of the mute button your texts will have to work harder to capture the user’s attention, but don’t worry here are some text tips you can try with your campaigns:

Test out your In-stream ad zones: So if you target the same sites that you bid on for In-stream ad zones, you will reach the websites whole audience and not just the ones watching an in-stream video on a particular ad zone. Using Outstream will ensure that even users on the site not necessarily watching video content, will see your video ad.

Keyword targeting: Some publishers have keyword targeting tagged for different web pages devoted to certain categories to attract advertisers with specific products or video creatives related to the web pages content. For example, if you have a dating offer use keyword targeting such as: love, dating, romance, etc. That way your Outstream dating ad will be contextually relevant to the end user and generate more clicks.

Blend in: If you are targeting flat traffic deal for one particular big volume traffic site you could adapt your Outstream ad to copy the style of content on the site using the same font, font colour and size, so, as with Native ads it appears more like the content of the publisher’s website to generate more clicks.

Use VAST: VAST Wrappers are common in the video ad serving industry. One of the benefits of using a VAST wrapper is that it allows a third party to insert their own tracking events and receive notification of when certain events occur (for example, when the video starts to play, video completion, clicks, etc).

VAST allows you to use Custom Attribution: What if a user saw your video ad and didn’t click on it, but later remembered your product and did a type in search in Google – wouldn’t it be good to know that this type in came because he had previously seen your video? What if a user saw your video but didn’t click but later saw your banner ad for the same offer then clicked on the banner – wouldn’t it be useful for you to know that he had previously also watched your video. This called Custom Attribution for deeper tracking 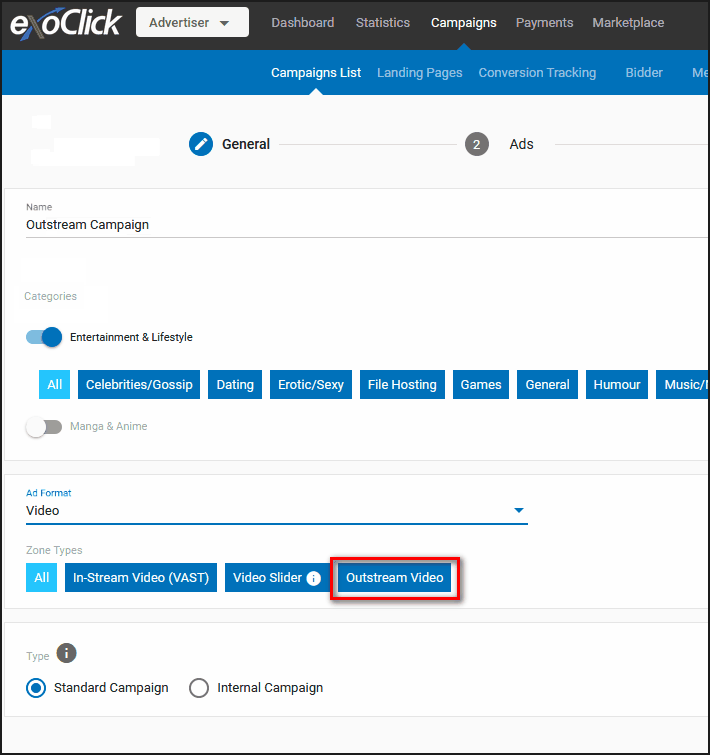 Step 3: Ads – Create the ad variations for the campaign and select a Distribution Algorithm to distribute traffic between them. Below is Step 3’s flow:

Step 4: Targeting – Here you can target or exclude in the campaign by Location, Devices, Operating Systems, Languages, Browsers and Mobile Carriers, etc. 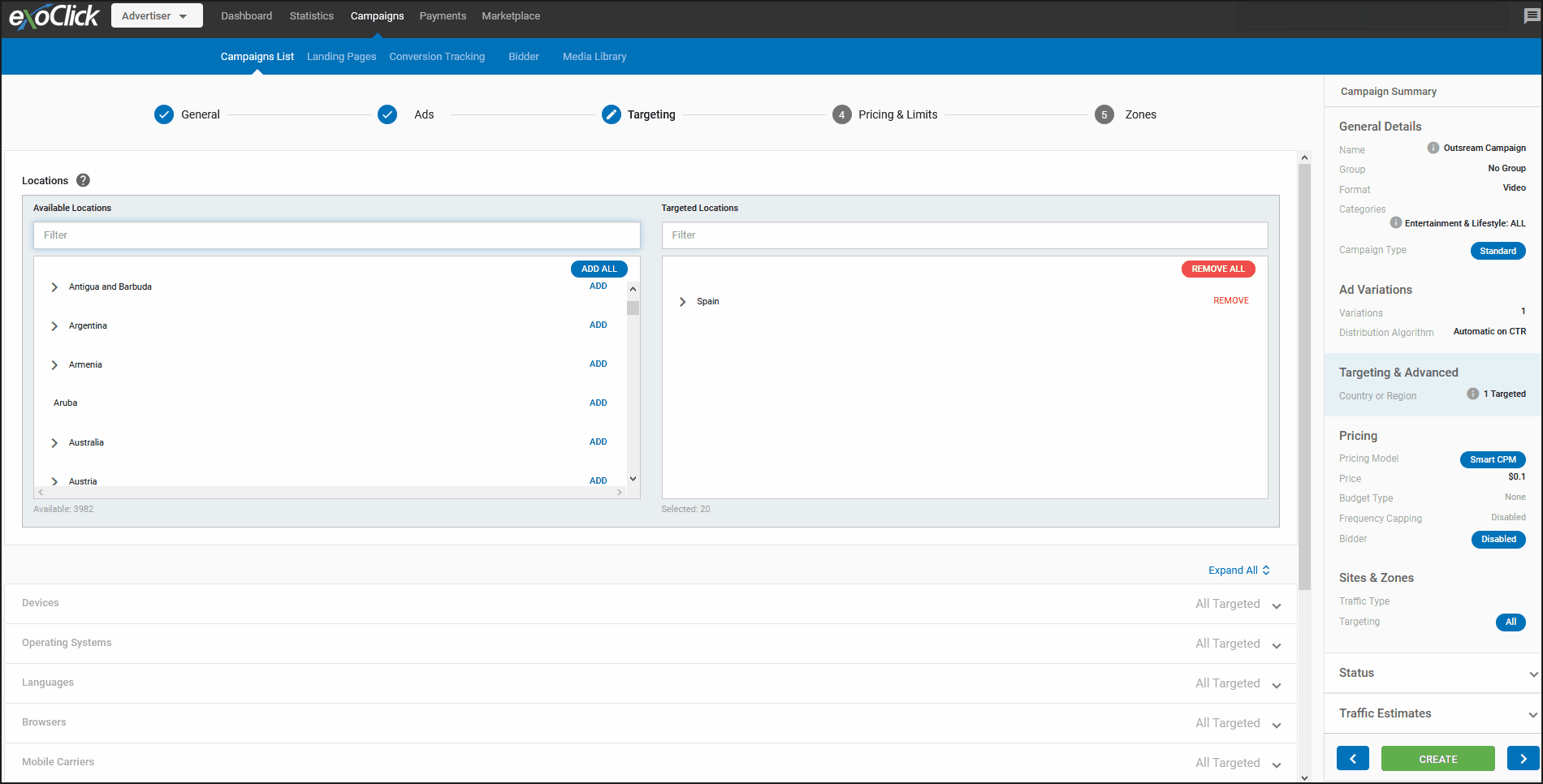 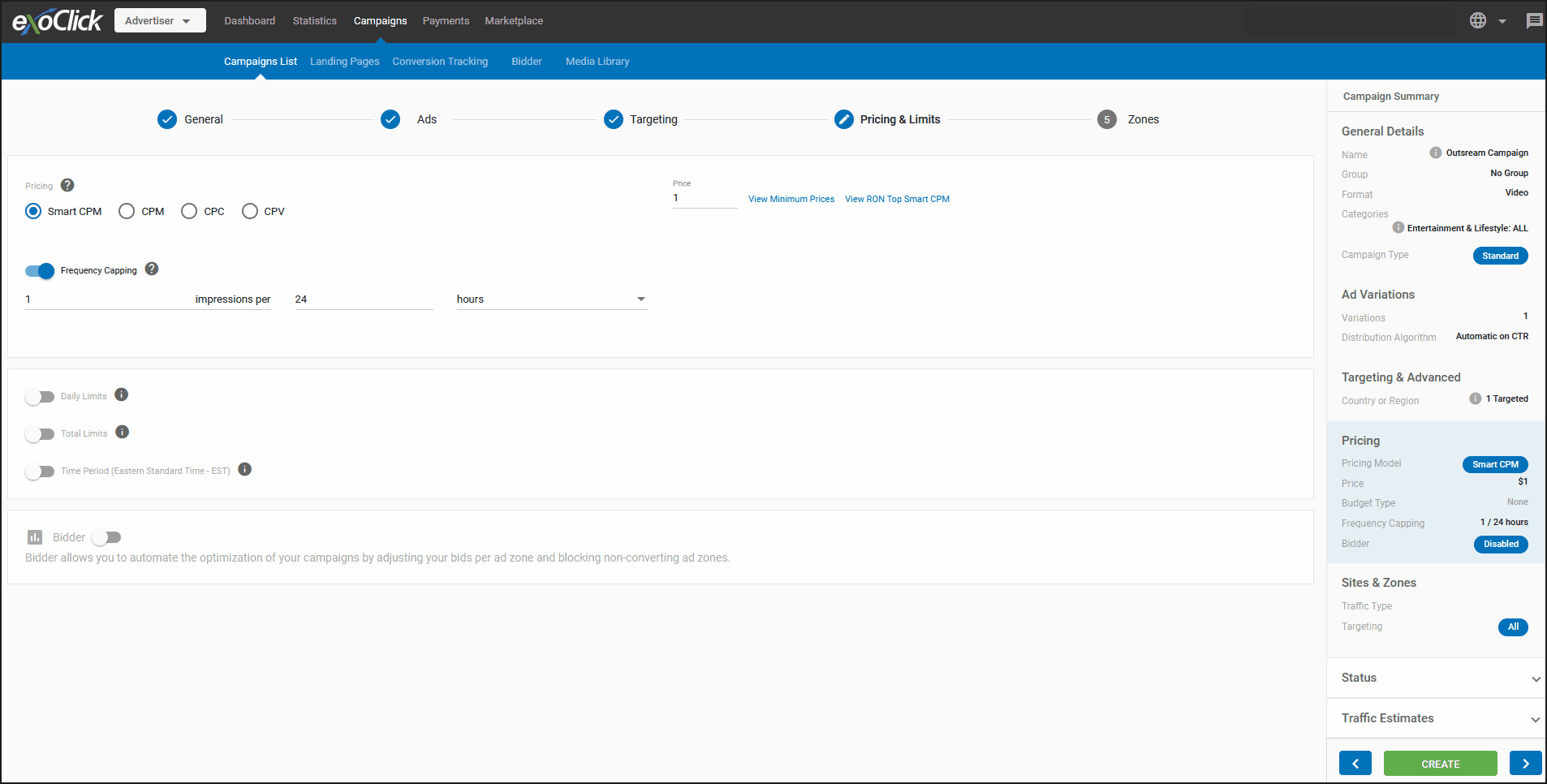 Step 6: Zones – Here you can choose which sites and zones to target and exclude. 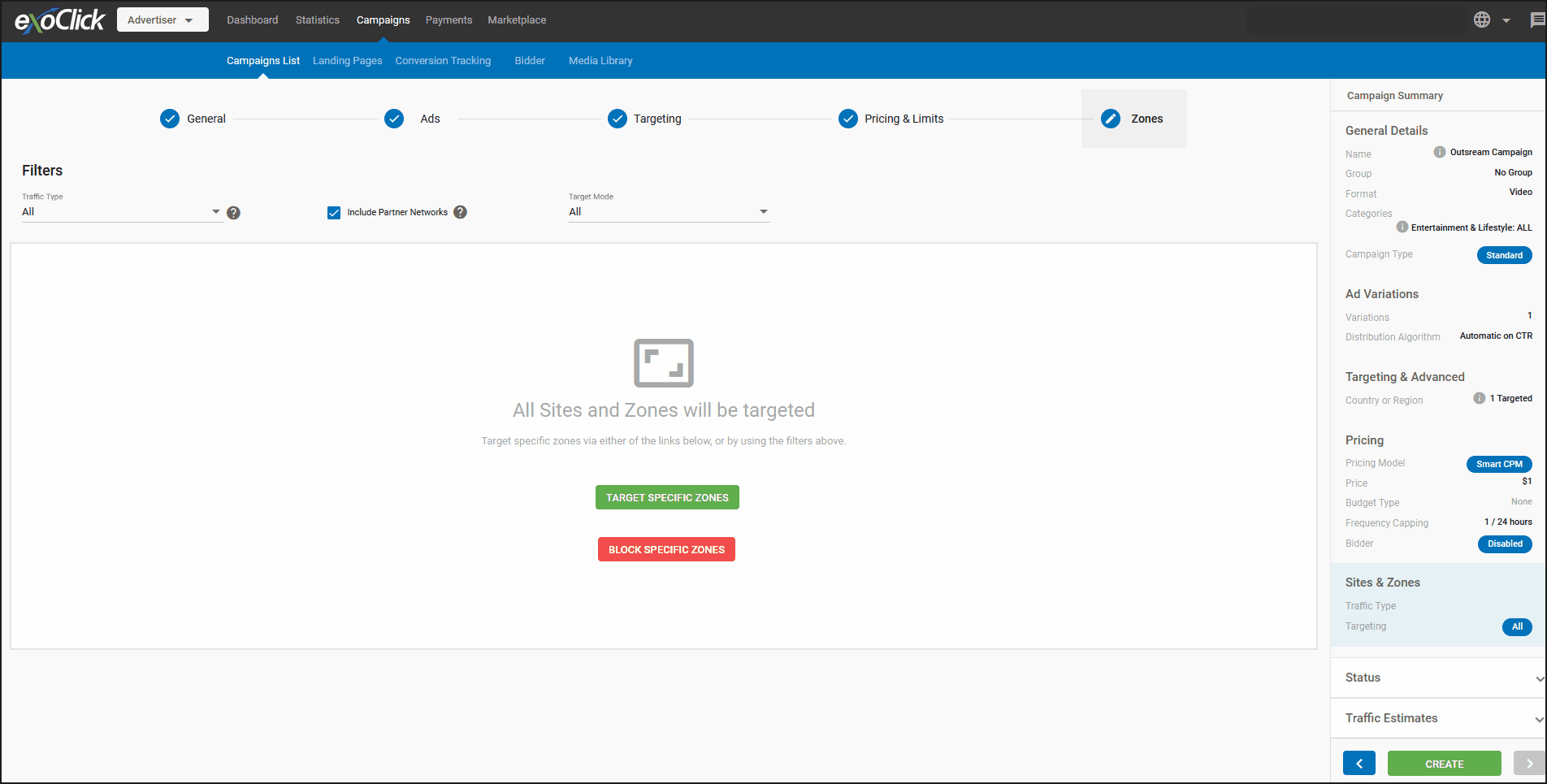