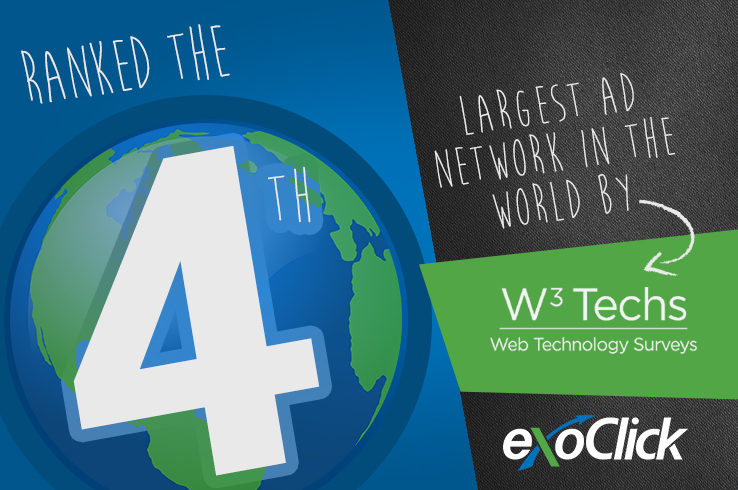 Barcelona, Spain. 17 February 2015: ExoClick, the innovative ad network, today announced that it has broken yet another record and is now ranked as the 4th largest ad network in the world by web technology survey provider W3Techs, with the company now generating more than 4.2 billion impressions a day.

ExoClick moved up from last years 5th position and CEO and founder Benjamin Fonzé commented on the company’s increased market share, “Throughout 2014 we introduced a number of strategically planned expansion goals. Firstly, we implemented several innovative platform tools and enhancements all designed to allow our clients to really fine tune their traffic sources by new methods of segmentation, experimentation and targeting to better monetise their ROI. For example, we introduced infinite flexible frequency capping bettering the option that Google offers by allowing retargeting of ads in minutes and hours, something that AdWords doesn’t offer. Another example is our Android App which has made ExoClick a truly multi device platform, giving both advertisers and publishers access and full control of their accounts via desktop or mobile device, allowing 24/7 access to clients from wherever they are.”

Fonzé continued, “The second factor is our global mainstream growth achieved by targeting specific traffic segments including gaming, dating, entertainment and mobile. Our sales team have driven new business by attending key mainstream US shows Ad:Tech San Francisco & New York, Affiliate Summit West and several major European shows. We have also boosted our global presence with mobile carriers in emerging and developed markets and launched an Android in-app SDK to target mobile app developers. Thirdly, the ExoClick team, which we have expanded significantly across all departments, thanks to their continued hard work and the management team’s strategic planning, we have achieved exponential growth for a privately held company.”

ExoClick was recently ranked as the 50th fastest growing tech company in Europe, Middle East and Africa in Deloitte’s Fast 500. ExoClick achieved a growth rate of 2642%, and is the only Spanish registered company to be featured in Deloitte. W3Techs top 5 five in order are Google Ads, Amazon Associates, Ad Roll, ExoClick and Infolinks.