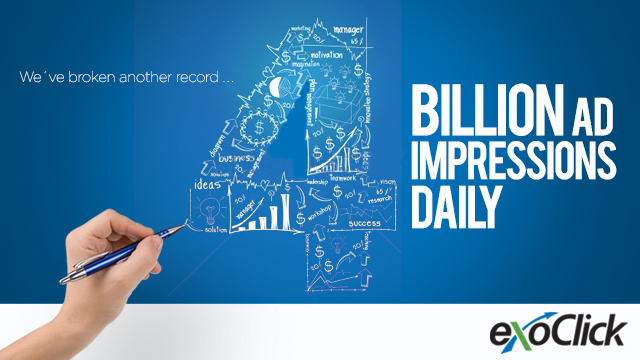 Barcelona, Spain. ExoClick, the world’s #1 ad network for the entertainment market, today announced that it had broken yet another record by reaching 4 billion daily ad impressions via its proprietary global ad technology.

ExoClick has seen rapid growth due to its access to the world’s top 1 million websites and the company’s aggressive expansion into mobile which now accounts for 27% of all ExoClick ad impressions, a significant jump from 19.3% back in August 2013 when the company announced it had reached 3 billion daily impressions.

Benjamin Fonzé, CEO & Founder of ExoClick commented, “Reaching 4 billion daily ad impressions is a fantastic milestone for us. Our sales team is one of the strongest in the business and is growing fast with over 16 different nationalities onboard we can provide excellent local market knowledge for our clients.”

Fonzé continued, “We currently continue to improve our platform and interface with a strong emphasis on ‘big data’ which will help us launch further advanced features and with our 24/7 customer service ensuring clients get the fastest service possible, we are well on the way to reaching 5 billion impressions as we continue to aggressively grow our market share.”

ABOUT EXOCLICK:
Launched in 2006 and based in Barcelona, Spain, ExoClick is an innovative global ad network serving 100+ billion geo-targeted ads a month to web and mobile advertisers and publishers.

Founded by current CEO Benjamin Fonzé, Exoclick is now ranked as the 5th largest ad network in the world by W3Techs and the #1 ad network for the entertainment market. The Company has been ranked twice in the Deloitte Fast 500 and has also received several industry nominations for its business excellence including winning Traffic Services Company of the Year 2013 by XBIZ.