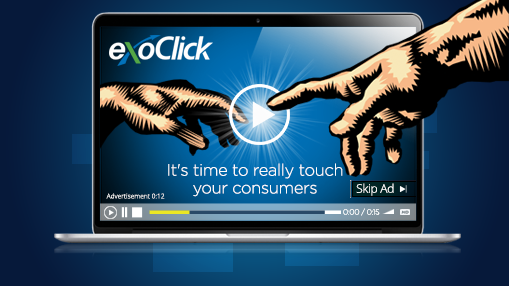 Barcelona, Spain. May 2, 2017: ExoClick, the innovative ad network, today announced that it has taken it’s Pre-Roll In-Stream video format out of beta and it is now available across its entire network. Additionally, there is a major update to the company’s Admin Panel (version 3.2.0.) which contains some useful new features.

ExoClick’s Pre-Roll In-Stream video ad format is inserted at the beginning of existing video content on a publisher’s site such as a movie scene or trailer. The video ad automatically plays when a user clicks to play the video content they decided to watch. The ad’s content is customizable with clickable calls to action in order to encourage consumers to click through to the product or offer.

For publishers, the ad format places high quality, premium video ads on their site and they have further control over the video format by adding a timed ‘skip this ad’ button within the advertisement. The ad format works with all major video players and works seamlessly with ExoClick’s free HTML video player Fluid Player.

There are two pricing models available for In-Stream ads: CPV (Cost-Per-View), the advertiser sets the cost which is triggered when 10 seconds of the video ad have been displayed to a visitor at normal speed, and CPC (Cost-Per-Click) where the cost is paid when a visitor clicks on the In-Stream ad. Frequency capping is available for effective retargeting and advertisers can access real time statistics.

New features available in the latest version of ExoClick’s Admin Panel include:

Benjamin Fonzé, founder and CEO of ExoClick commented, “This is a major update for Q2 to further help clients maximise their experience on the ExoClick platform. After several months of successful beta testing, we have finally launching the In-Stream ad format across our network. Publishers can now create in-stream ad zones, and are offered different integration methods, depending on their video player. We encourage publishers to use our own free and open-source HTML video player: Fluid Player.”

ABOUT EXOCLICK
Launched in 2006 and based in Barcelona, Spain, ExoClick is an innovative global ad network serving 165+ billion geo-targeted ads a month to web and mobile advertiser/publisher platforms via its proprietary software.