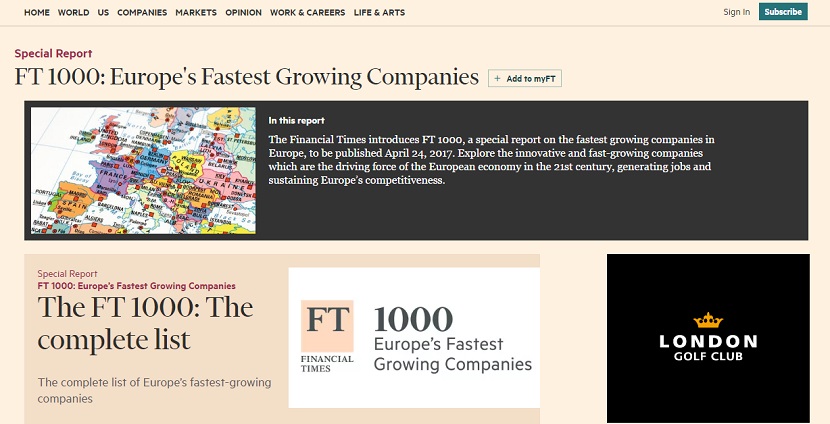 7 April 2017. Barcelona, Spain. The Financial Times newspaper has ranked ExoClick at no. 523 in the ‘FT1000 Fastest Growing European Companies 2017.’  The prestigious list recognises innovative and fast-growing businesses that are the driving force of the European economy, sustaining Europe’s competitiveness and generating jobs.

Benjamin Fonzé, ExoClick’s founder and CEO commented, “The Financial Times is one of the world’s leading publications for business and I am extremely proud that ExoClick has been included in the top 1000 fastest growing European companies. It is quite an achievement for a privately owned company that has received no outside investment. This has enabled us to grow at our own pace throughout the ten years we have been in business. Our profits are continually reinvested and we develop our business and expansion in a cautious way. We have never wasted money and only invest in things that we really believe in. Through hard work, the right strategic business decisions and the support of a great team, we have grown to become the 4th largest ad network in the world.”

A feature on this year’s FT1000 ranking can be found here.

Founded by current CEO Benjamin Fonzé, ExoClick is ranked as the 4th largest ad network in the world by W3Techs and the #1 ad network for the entertainment market. The Company has been ranked three times in the Deloitte Fast 500. ExoClick won the Ruban d’Honneur Award for The Business of the Year with a Turnover of €26-150m in the 2015/16 European Business Awards and the Company was ranked at number 11 in the Top 20 Best Workplaces in Spain in the category of companies with between 20-49 employees (PYMES).