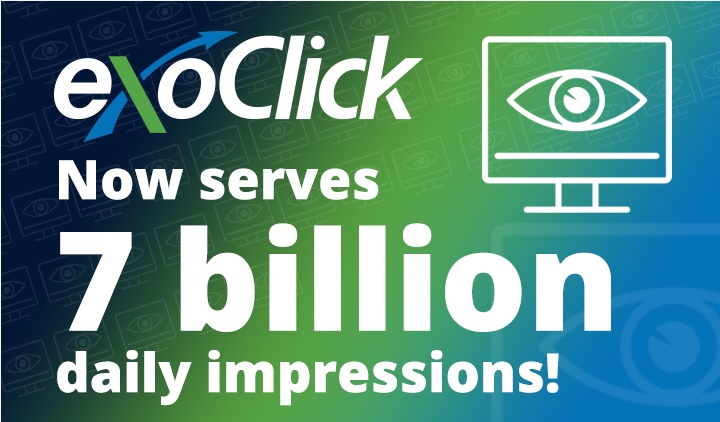 Barcelona, Spain. 23 January 2019: ExoClick, the innovative ad company, today announced that it has broken another record, it is now serving 7 billion daily ad impressions across its global ad network of publisher sites.

Benjamin Fonzé, CEO & founder of ExoClick commented, “Pushing through the 7 billion daily ad impressions is a considerable achievement, when you consider the industry wide market changes that occurred in 2018 including Google Chrome’s new compliance rules, the growing number of adblock software installs and GDPR.”

Fonzé continued, “I think there are several factors that have contributed to this significant growth in impressions. Firstly, regarding Google, we were quick to introduce a new range of compliant ad formats whilst educating our publishers and advertisers on how to continue to maintain their revenues and stay compliant. We introduced a new Google compliance system for publishers so they could block non-compliant ads with just one click in our admin panel. We promoted Evangelos Ziridelis to Sales and Ad Operations Director who implemented many platform improvements, optimisation tools and re-shaped how we now manage sales. We have been steadily growing our exclusive members area and email dating traffic with new deals. Both our In-stream video and Native ad formats have seen spectacular growth. We launched the Push Notification ad format back in October 2018 and in the last 30 days we have added 10 million new users. Our RTB team are now managing over a billion daily RTB events for both supply and demand. And finally, our hard working team of ExoClickers who are the driving force in pushing our business forward day in and day out. Stay tuned for more innovations in 2019!”

Here is a timeline of ExoClick’s impressions growth: