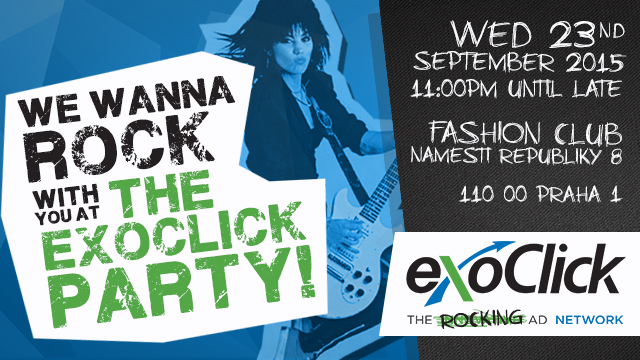 Barcelona, Spain. 18 August 2014: ExoClick, the innovative ad network, is pleased to announce that the company is a supersized sponsor of The European Summit to be held in Prague, 22-25 September 2015.

The European Summit is one of the main autumn shows for the online entertainment industry, connecting over a thousand digital entertainment professionals to this 3 day networking event.

As part of the sponsorship package ExoClick will be hosting the event’s main party ‘Rock With You’ to be held on Wednesday 23rd September at the Fashion Club, Náměstí Republiky 8, 110 00 Praha 1. The party kicks off at 11pm until late and features a 2 hour 80’s rock dance special DJ session.

ExoClick’s CEO and founder, Benjamin Fonzé, commented, “Once again we are very proud to be a supersized sponsor of The European Summit. It is one of the industry’s premier networking events and we are looking forward to demonstrate our recent platform updates, talk traffic, share ROI tips and to ‘Rock With You’ at the ExoClick party!”

ExoClick will be in the business lounge D1. To arrange a meeting at the event contact advertising@exoclick.com