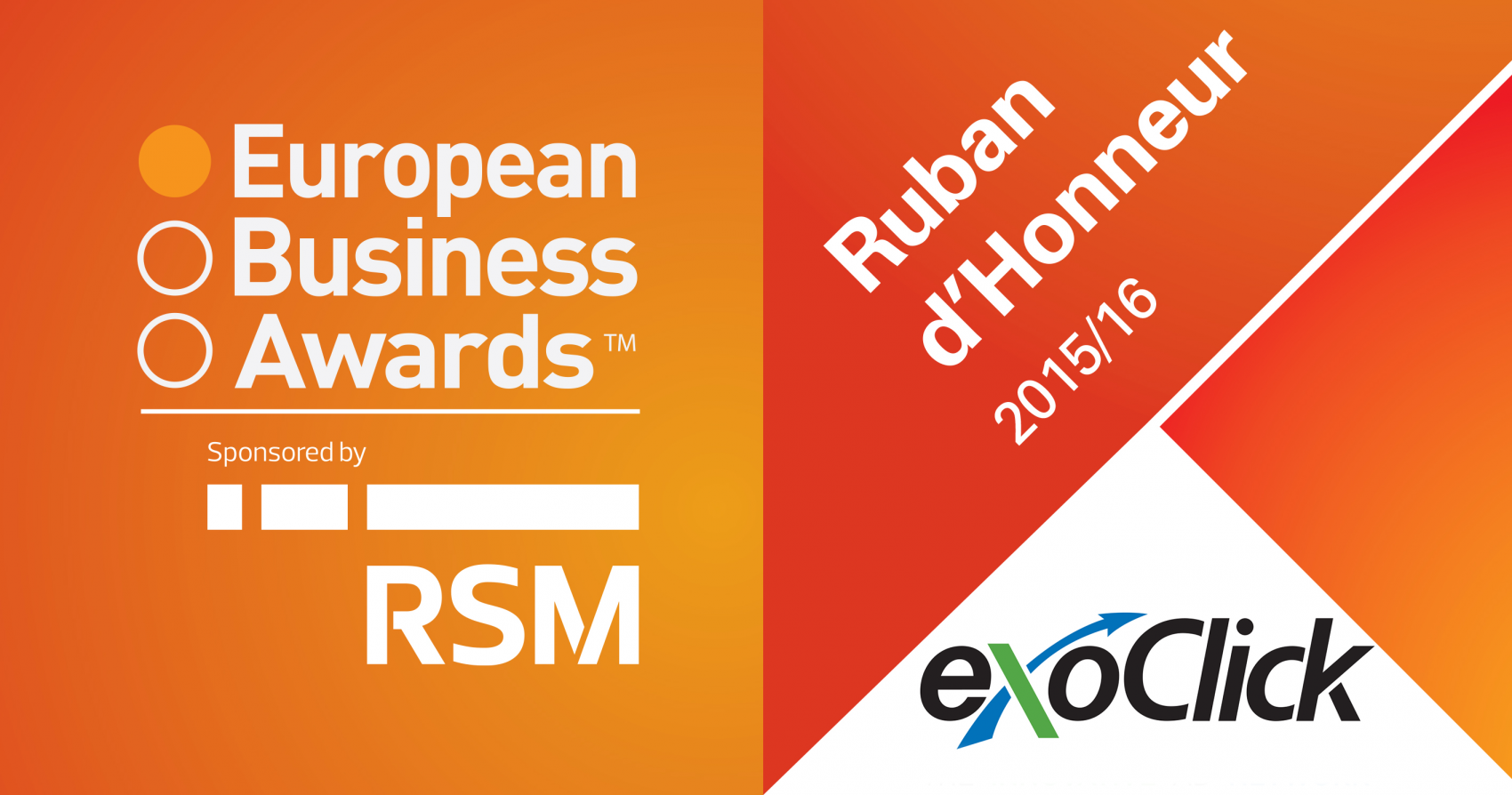 Barcelona, Spain. February 9, 2016: ExoClick, the innovative ad network, today announced that it has been awarded a Ruban d’Honneur award for ‘The Business of the Year with a Turnover of €26-150m’ in the 2015/16 European Business Awards.

The Ruban d’Honneur is a special award given to European companies that show true innovation, valued ethical standards and excellent financial growth in their field. ExoClick was selected from 678 National Champions by an esteemed panel of judges made up of European business and political leaders, academics and entrepreneurs. The company is one of 110 Ruban d’Honneur recipients chosen from across Europe. A full list of winners can be seen here.

Benjamin Fonzé, ExoClick’s founder and CEO enthused, “It is a great honour to be chosen as one of the top companies in Europe and receive the Ruban d’Honneur from the European Business Awards. 2015 was our best year ever, with a 23% growth in revenues compared to 2014. The ExoClick team is continually working to innovate and create industry leading features with our proprietary ad network platform, this linked with the right strategic business decisions and partnerships has enabled us to continue to provide our clients with new opportunities for success and maximising their ROI.”

Adrian Tripp, CEO of the European Business Awards said: “To survive in this economic climate is hard enough, so to innovate, prosper and grow in the way this year’s Ruban D’Honneur recipients have is truly remarkable. Europe needs more companies like these. Well done to ExoClick.”

Running alongside the independent judging part of the competition is a public vote, which will decide the ‘National Public Champions’ of the awards for each country for which ExoClick has submitted a video. To vote for ExoClick’s video entry click here.

The winners of the public vote will be announced on 7th March.

The European Business Awards’ primary purpose is to support the development of a stronger and more successful business community throughout Europe.

For all citizens of Europe, prosperity, social and healthcare systems are reliant on businesses creating an even stronger, more innovative, successful, international and ethical business community – one that forms the beating heart of an increasingly globalised economy.

• It celebrates and endorses individuals’ and organisations’ success

The European Business Awards is now in its 9th year. It attracted over 32,000 businesses to the competition last year and in the public vote generated over 170,000 votes from across Europe. For more information visit www.businessawardseurope.com

Launched in 2006 and based in Barcelona, Spain, ExoClick is an innovative global ad network serving 155+ billion geo-targeted ads a month to web and mobile advertiser/publisher platforms via its proprietary software.

Founded by current CEO Benjamin Fonzé, ExoClick is ranked as the 4th largest ad network in the world by W3Techs and the #1 ad network for the entertainment market. The Company has been ranked three times in the Deloitte Fast 500. CEO Fonzé was honoured by Xbiz with the Tech Leadership Award for 2015. ExoClick won the Ruban d’Honneur Award for The Business of the Year with a Turnover of €26-150m in the 2015/16 European Business Awards and the Company was ranked at number 11 in the Top 20 Best Workplaces in Spain in the category of companies with between 20-49 employees (PYMES).